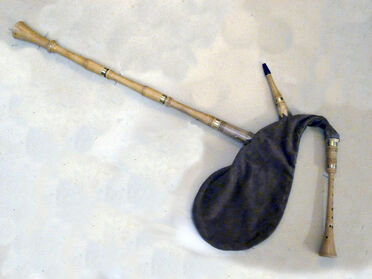 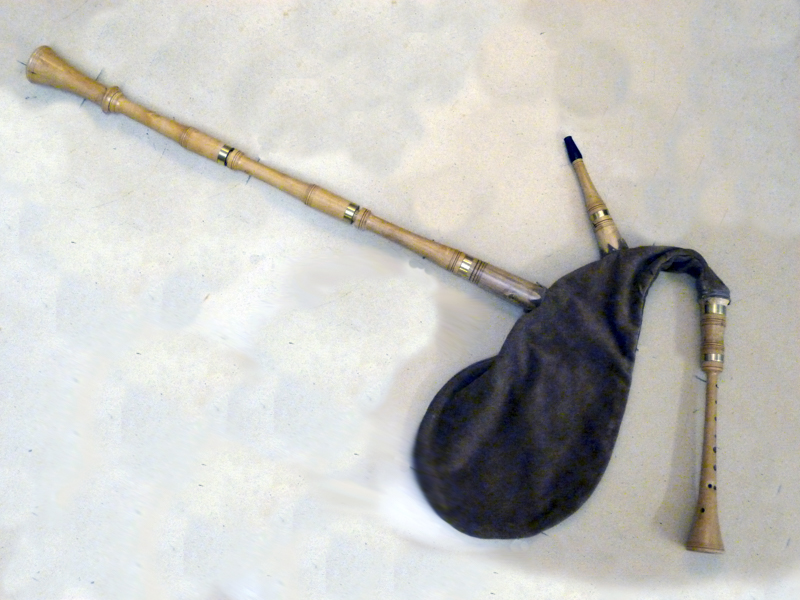 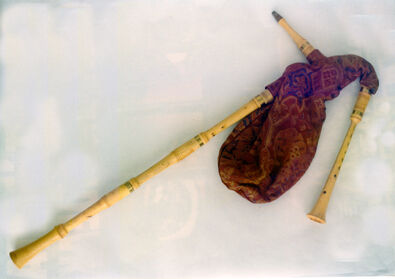 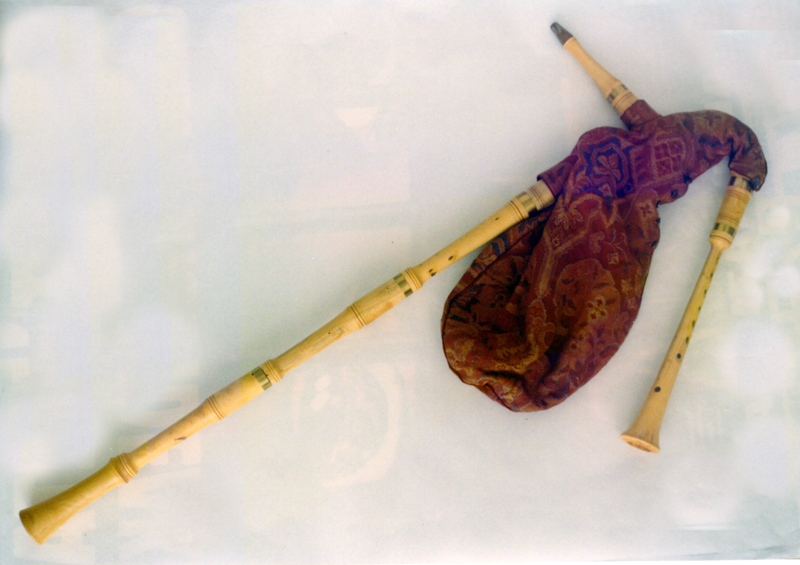 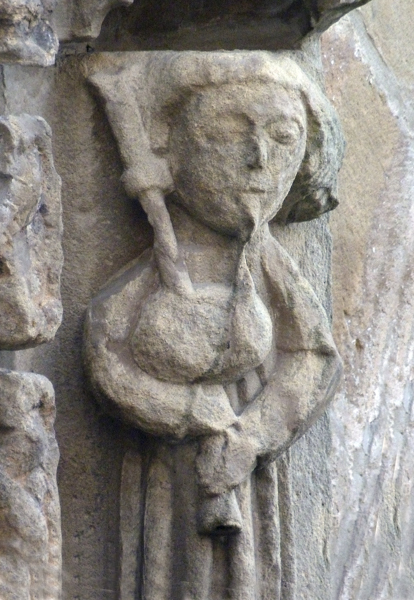 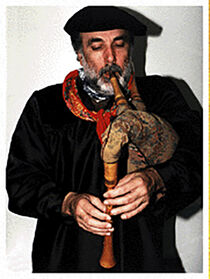 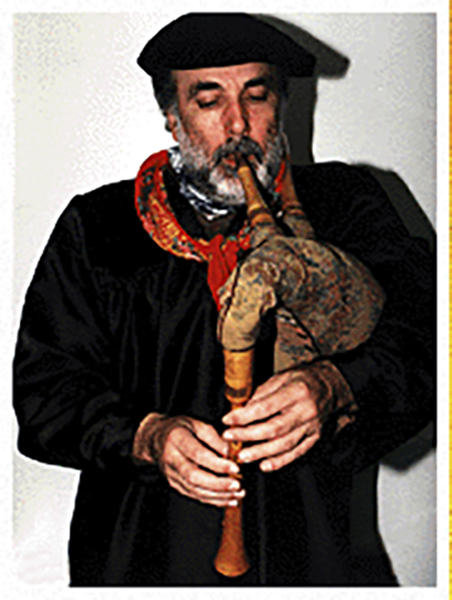 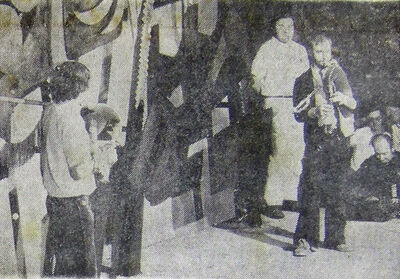 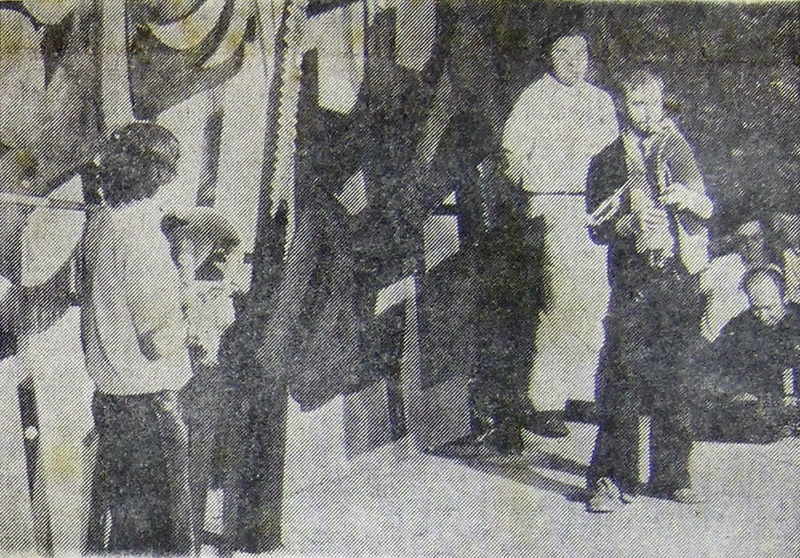 The xirolarru-bota or bagpipe belongs to the aerophone group.

The bota bagpipe (xirolarrua) has the following parts: melodic pipe, roncón, skin for air and blowpipe.

He takes the wineskin for the air under his arm, the roncón over his back and the pointer in his hands, he puts the torch in his mouth and plays. It is blown into the torch, introducing the air into the bag and controlling it with the pressure of the arm. When this air reaches the dulzaina-type melodic tube and the bordón, they give the melody and the pedal note, respectively.

Despite the fact that the xirularrua-bota has not been played in Euskal Herria for a long time, in the section on the boha-xirolarrua (alboka type) it is observed that this type of instrument has been used before in our country.

Now we want to mention this other type of xirolarru. The bota bagpipe has a double reed pita (oboe) on the xirola or conical melodic tube, and a single reed “fita” (clarinet) on the roncón or cylindrical tube.

It is not clear to what extent they were used because, in ancient documents, many times we cannot clarify whether behind the word "gaita" means the "dulzaina" or the "bagpipe" type instrument.

We know that this type of instrument was used in Rioja Alavesa. An old document from Oyón from 1662 says: "Seventy-seven duros were paid to the piper for the work of playing the bota of the Feast of the Immaculate Creation." We believe that the "bota" would be taken by the wineskin as a wine boot (zahato) (Jiménez, 1972, p. 6).

As Father Donostia (1952) says: "It seems that at the end of the 13th century and the beginning of the 19th, in some towns in Álava the tambourine was not played. In the Álava area it was replaced by the Galician bagpipe" (p. 300 ).

In some Rioja localities in that area this instrument was still played in the sixties of the twentieth century. After an exhaustive study and reconstruction work carried out in recent years by the local team of researchers ‘Entresaque’, today we can see, play and hear this instrument again.

As we have seen in the Gaita-dulzaina section, we can think that there would be bagpipers among the musicians who attended the Pamplona festivals in the 18th century. Here is one of the examples (J. Ramos, 1990):

We are convinced that in the past this type of instrument would be used in Navarra. Among other documents, Father Donostia (1952) cites: in a copy of the Privilege of the of the Municipal Archive of Pamplona, ​​there is a player with a similar instrument (bagpipe with air skin, blowtorch, melodic pipe and roncón), disguised of horse in a 15th century drawing (p.283).

The iconographic documents that appear in many places in Euskal Herria make it clear that, as in the surrounding towns, this type of instrument has also been used among us. In the church of Santa María de Vitoria, in San Andrés de Elciego, in the cathedral of Pamplona and in the basilica of the Assumption of Our Lady of Lekeitio, among others, we can see bagpipers (Beltrán, 2012).