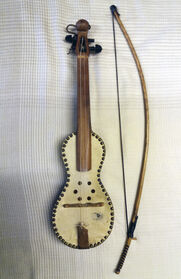 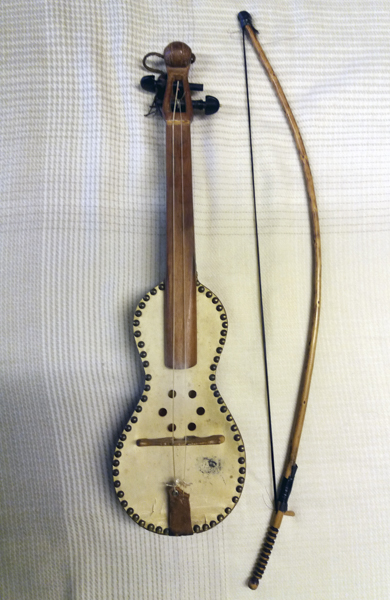 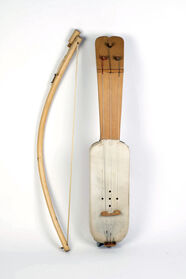 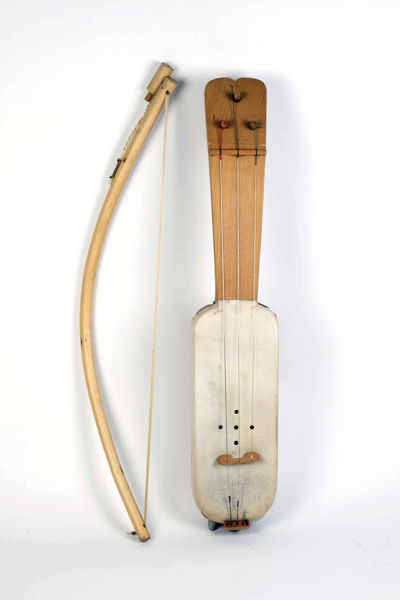 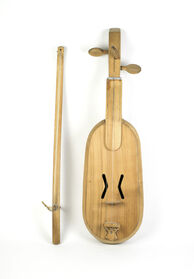 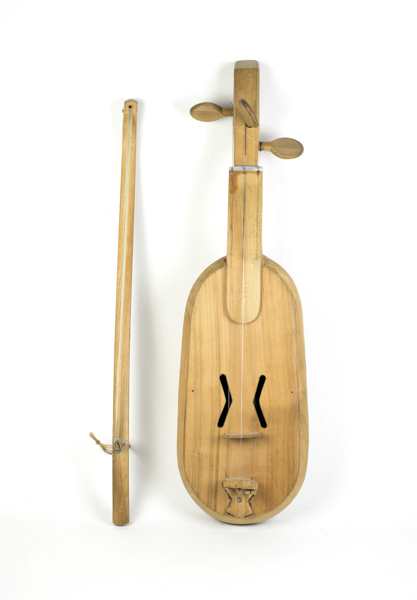 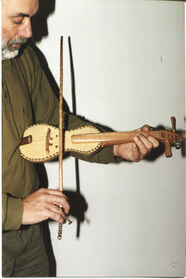 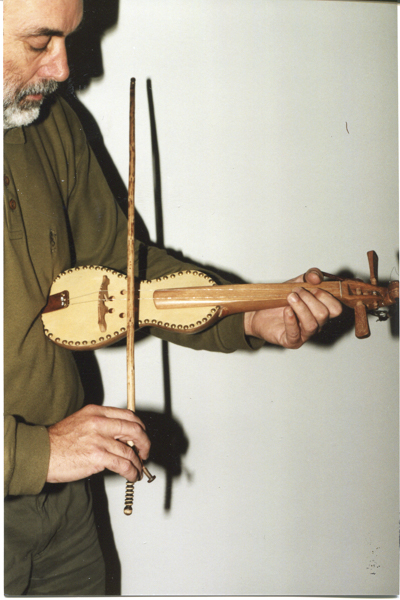 The rebec is a rubbed chordophone. The arrabita in Basque not only refers to this chordophone, but also to the violin. Surely, the violin acquired the former function of the arrabita (rebec), causing the confusion of s.

The rebec usually has a wooden resonance box and neck. The lid of the box can be both wood and leather. Two or three strings of horsehair, gut or metal can be stretched from the headstock to the bridge.

The neck of the instrument is held with one hand, so that the fingers press the strings to give the notes. The bow is grasped with the other hand, and its strings rub the strings of the arrabita. The instrument can be placed on the arm against the chest or vertically on the knee.

Looking at the instrument from the front, the left string usually gives the bottom note (pedal) and sets the rhythm with the movements of the bow. The right string gives the melody of the song. The melodies that are played with the arrabita usually have a small range. This instrument is often used to accompany singing.

There is a significant presence of rebec players in the iconography of the Basque Country. We can find them, for example, in the following places:

In Álava, in the old cathedral of Vitoria, in Santa María of Laguardia and in the parish of Tuesta.

In Bizkaia, in the parish of Lekeitio and in the church of Andra Mari in Ondarroa.

In Gipuzkoa, in the parish of Santa María in Deba.

In Lapurdi, in the cathedral of Baiona.

At present, arrabita is almost totally accepted as a synonym for violin, but in view of the old documentation, it is evident that two similar instruments are mixed with this denomination (the rebec and the violin).

We believe that, as happened in other cultures around us, the rabeles were spread in our territories in former times, but later the violin would occupy the function that the old instrument had. This could be the cause of the confusion of s in later times. Here we will try to limit ourselves to the rebecs (arrabita).

Continuing with the work of Aita Donostia (1952), we find some mentions on the ancient use of rabeles:

"In Balmaseda, 1571, «they gave two men who played tambourine and arc rabel instruments, for two days that they occupied themselves in playing in the rejoicing of the Birth of the Prince Our Lord, 470 maravedies»." (p. 268)

“Witches of Hondarribia. Trial of the 17th Century. 1611. 6th of May. In Hondarribia, a witness tells he saw many tanbolines and Rabeles instruments playing at the dho Puesto ”. (p. 306)

In the work of Jesús Ramos (1990), referring to the 18th century, we can see the list of musicians who came to the feasts of Pamplona. The following refers to the of the player, the instrument, the origin of the musician, the year and sometimes even the type of group (pages 102 to 118):

These musicians appear in many ancient documents up to the 19th century in almost all Basque territories.

Iñaki Irigoien (1994) also collects information on the following instruments: «(XVIII.) Taken from Zarate, he speaks of a high mountain in Gipuzkoa where they made their sacrifices: "Also in old fashion their biguirias, dancing to the sound of rabeles, albokas, and tambourines" (p. 53).

In 1997, after seeing and hearing an instrument of this type, the famous singer Manex Pagola, deputy director of the Basque Museum of Bayonne, commented: "An old man from my town told me that in his childhood the music of the town's carnivals was played with a cord".

It is evident that these sound instruments have been widely used in all our territories; alone, with the tambourine or as it appears many times, forming a group with the tabor-pipe player (xirula-txistu / danburi).